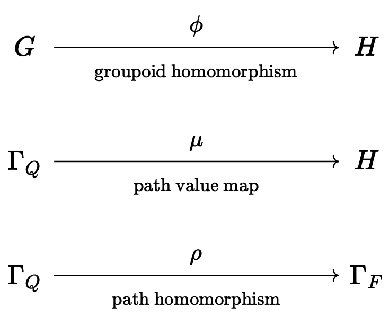 Our partial triangle covers many smaller graphs. For finite graphs, it’s clear that the covered graph has the same or fewer vertices, so we can conclude that up to isomorphism there are only finitely many covered graphs of \(\graph{G}\). Furthermore, if \(\graph{G}\coversSymbol \graph{H}\coversSymbol \graph{J}\), it's clear that \(\graph{G}\coversSymbol \graph{J}\), since the composition of two surjective homomorphisms is another. Therefore, covering forms a partial order on finite graphs, and we can depict this in the form of a larger vertical graph, with an edge between two graphs if the higher one strictly covers the lower one – in other words a graph is connected to one below it if it covers it, is not isomorphic, and the covering is not implied by transitivity. 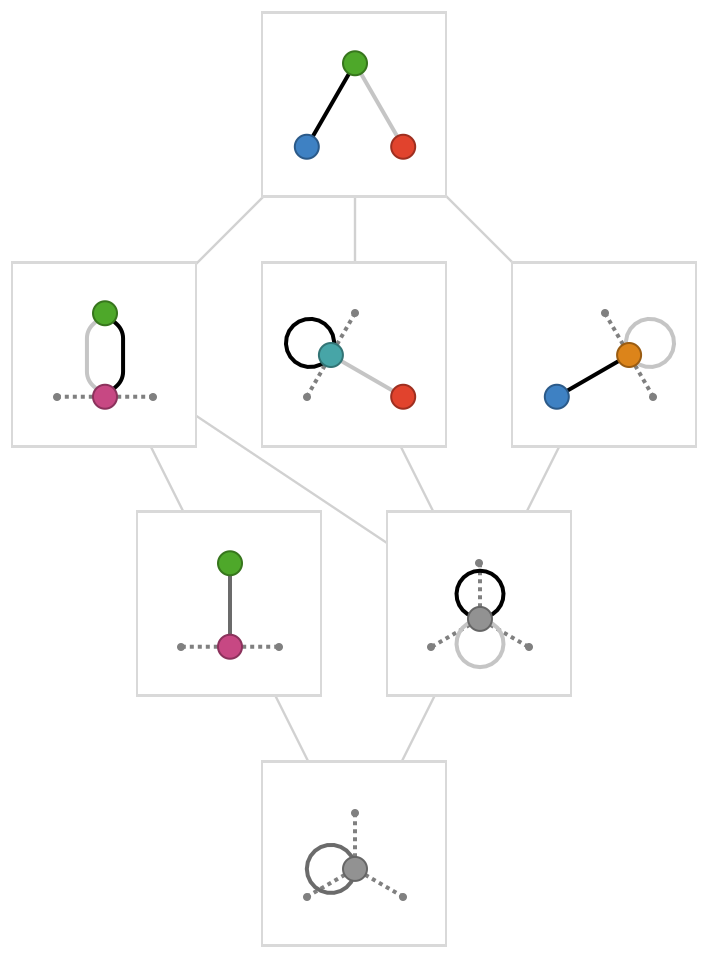 Let's consider the covering partial order for a "partial square" with 4 vertices and 3 edges. To reduce uninteresting complexity, we will avoid the explicit contraction of edges, and perform these contractions "greedily" whenever multiple edges exist between two vertices as a result of a vertex contraction: 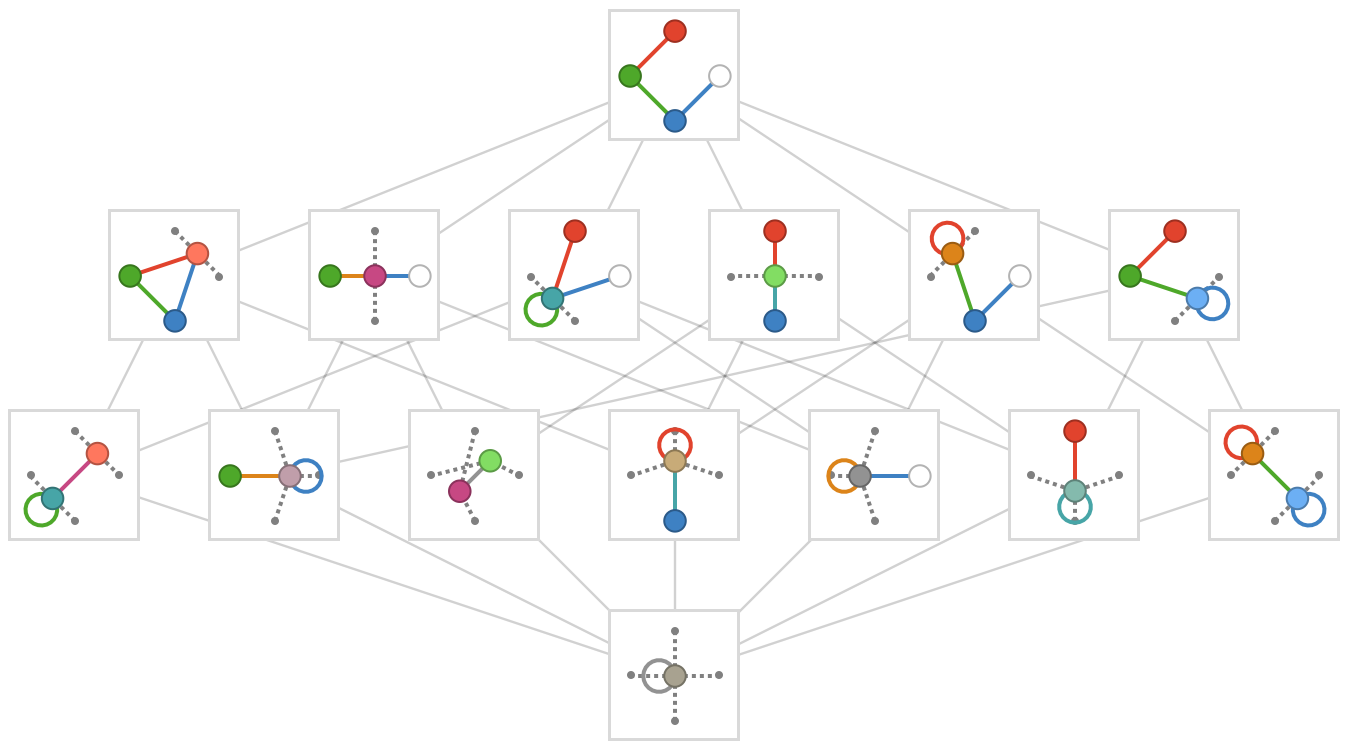 Notice that as in the previous example, this partial order terminates in a single vertex and self-loop, the 1-graph, which is covered by every other graph. This single vertex and its self loop are gray, reflecting the fact that they are the color average of all of the original primary-colored vertices and edges.

What about quivers? How do we extend the notion of covering to the quiver setting? We saw that for graphs, we could effect any particular covering in a sequence of atomic steps, in which we contracted together pairs of vertices and edges. It turns out that this approach does not work for quivers, for the elementary reason that we can easily violate the local uniqueness property unless we perform multiple vertex contractions simultaneously.

Let's take a simple example to illustrate this idea. We'll focus on coverings of \(\bindCards{\subSize{\squareQuiver }{2}}{\rform{\card{r}},\bform{\card{b}}}\): 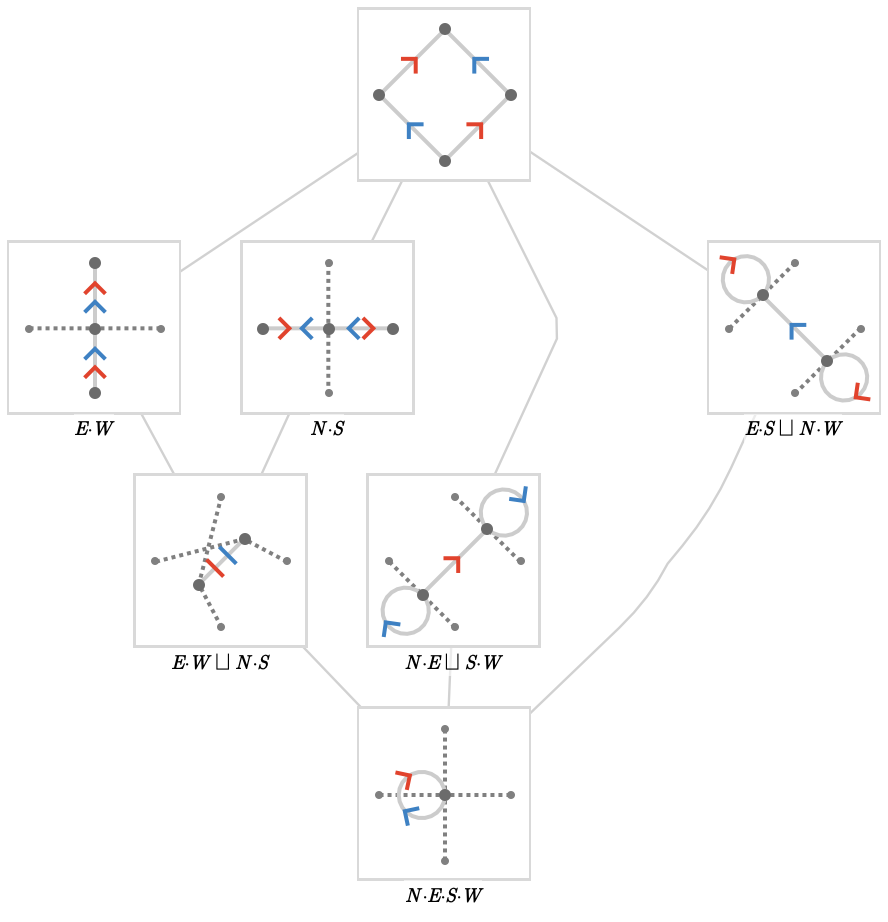 In the section Contraction lattices we will examine this object from an order-theoretic point of view, establishing the structure of an order-theoretic lattice (which is a different usage of the word "lattice" than that in Lattice quivers).

Let's now turn to the question of the connection between path homomorphisms and quiver coverings. 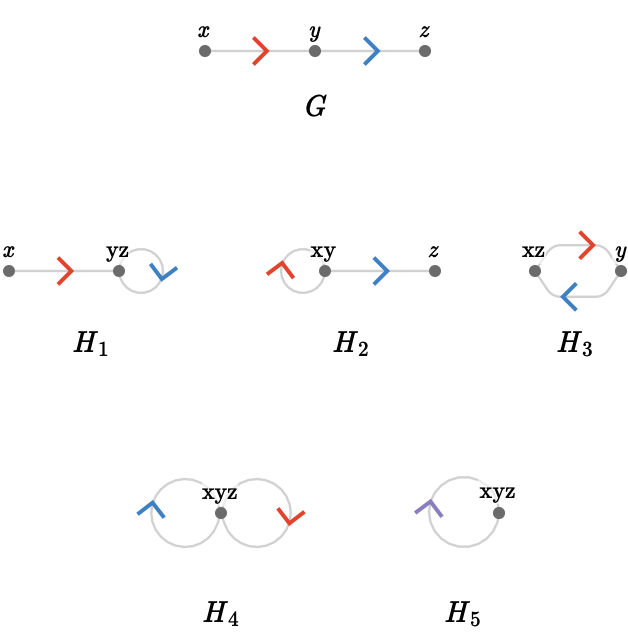 These form a partial order as before, which looks like this: 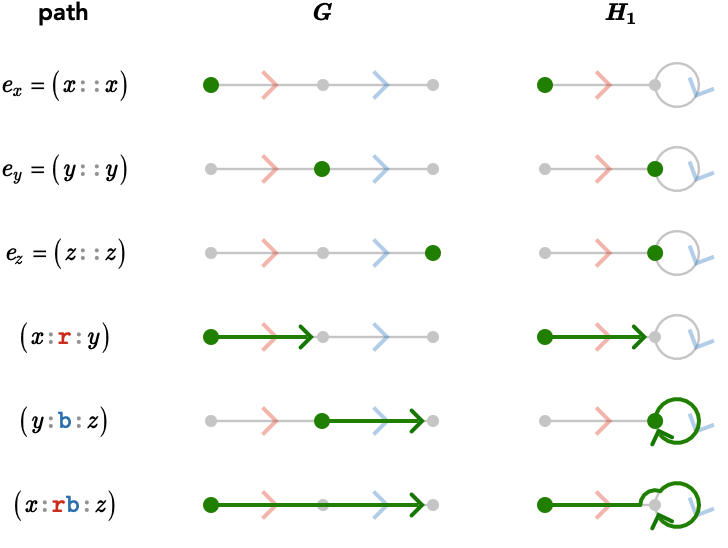 This path homomorphism is not surjective, of course: the 1-paths in \(\quiver{H}\) have no preimage under \(\pathHomomorphism{ \rho }\). However, we can construct a more elaborate surjective homomorphism that is still path lengthening? Here is such an example:

Clearly, if the covering quiver is disconnected we have considerable freedom in defining path homomorphisms.

The tentative answer then seems to be that without additional restrictions, a surjective path homomorphism does not automatically yield a covering. But the requirement we need is easily guessed: we must have a length-preserving path homomorphism, since this defines a unique (oriented) edge in the covered graph for every edge in the covering graph in a compatible way. 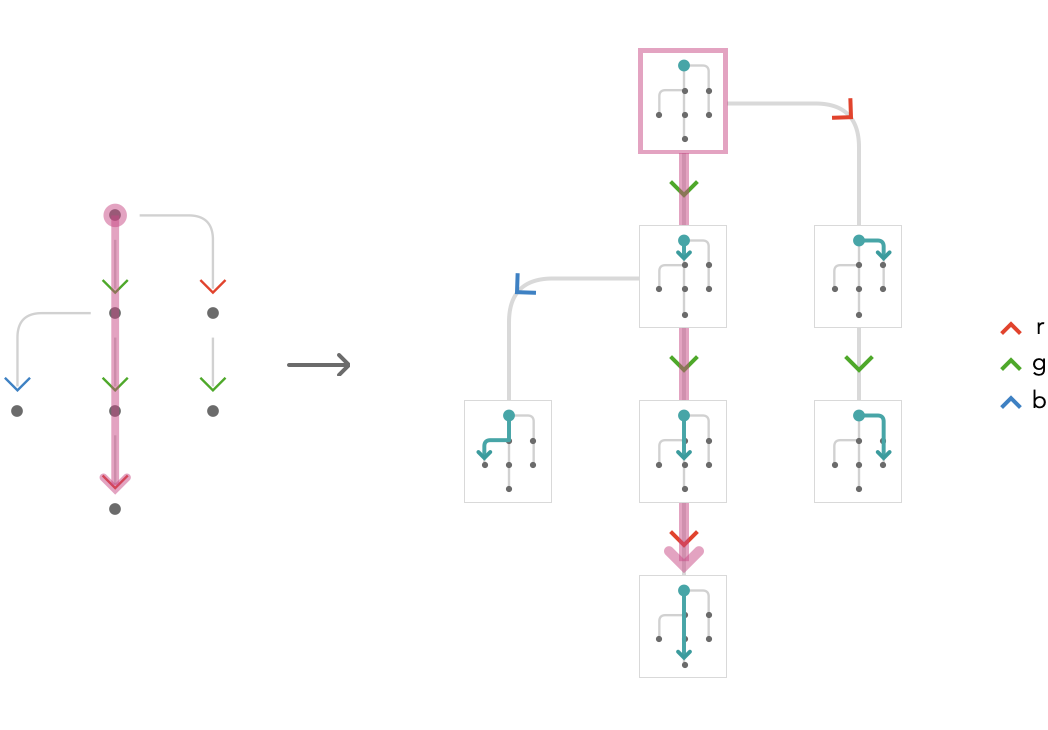 But to define a path homomorphism, we also need to figure out where to send paths which do not start at the origin. For the tree quiver example, this is straightforward: for a path \(\path{P}\) in the base quiver starting at \(\vert{t} \neq \vert{o}\), we choose a vertex in the path quiver corresponding to the path taking us from the origin \(\vert{o}\) to \(\vert{t}\), then use the path word as before: 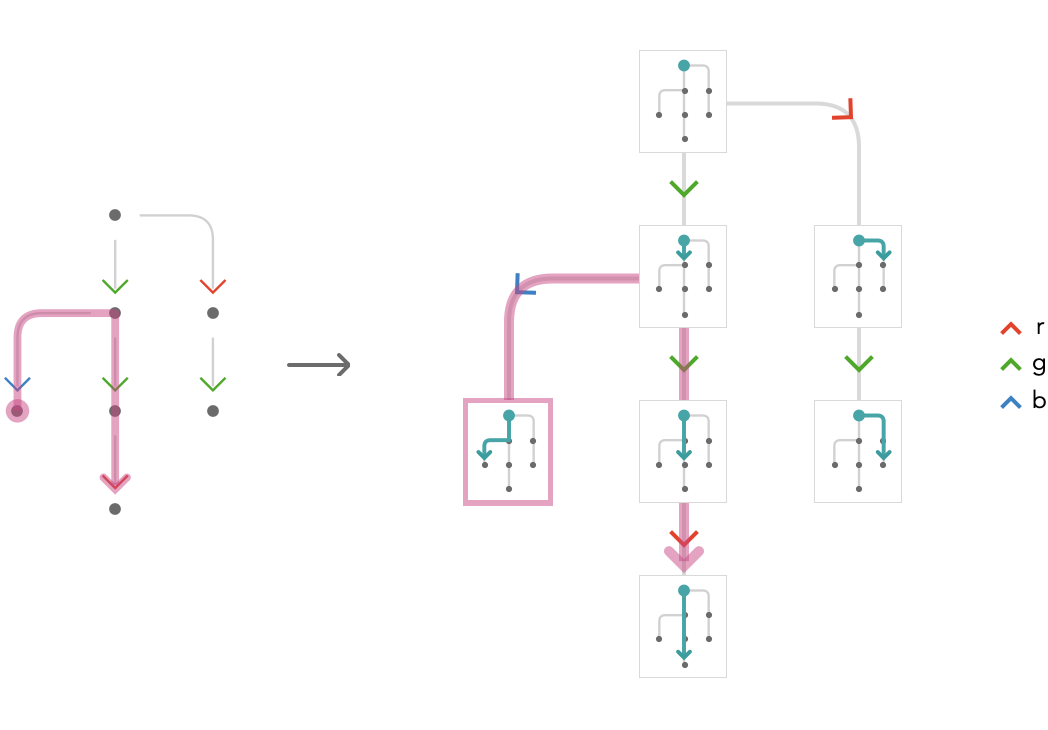 In the case of trees the of this path homomorphism from a quiver to its path quiver is trivial, because the path quivers of trees are already isomorphic to them. But it turns out a related construction will work for all finite connected quivers, not just trees. Let’s look at a simple base quiver that is not a tree: 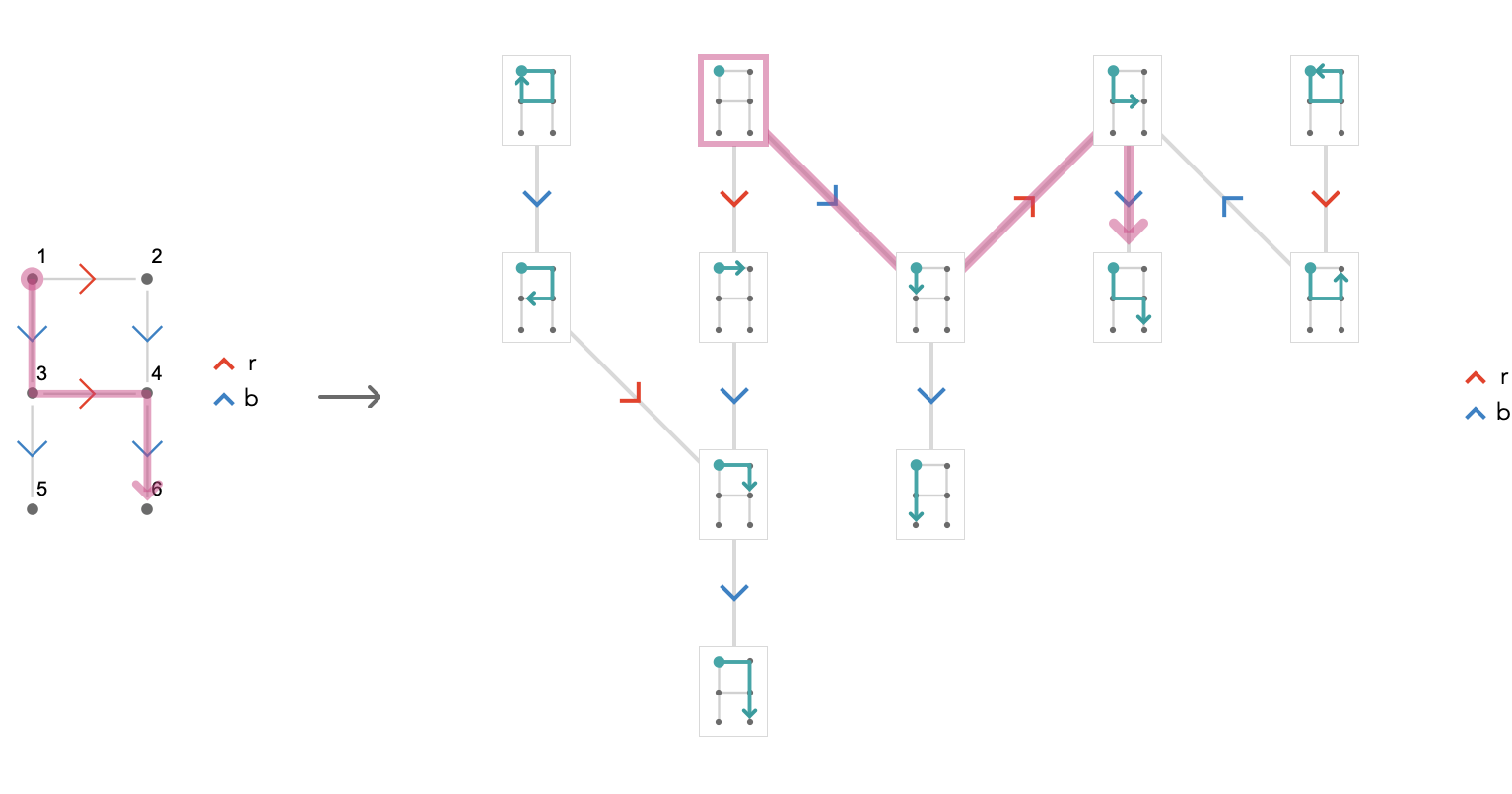 The “hard” part consists of dealing with paths like this:

An important fact about lattice quivers is they cover their fundamental quivers: \(\graphCovering{\graphHomomorphism{ \pi }}{\quiver{Q}}{\quiver{F}}\). To this covering is associated a path homomorphism \(\pathHomomorphism{ \rho }\), which we use to define the covering as follows: