We now make our first foray into dynamics: quivers that describe systems that change in time. To do this we will use the lens of rewriting systems. A (computational) rewriting system is a non-deterministic automaton that succesively transforms some global state, represented by an arbitrary data structure, by finding and applying well-defined rules that match particular fragments of the global state, replacing them with other fragments.

Eventually, we will see how to apply discrete versions of ideas from theoretical physics to these rewriting systems, giving us computational incarnations of the ideas that underly special relativity and field theory.

Here we show a table indicating how this may be done for various types of system:

Once a particular rewriting system type has been chosen, it remains to specify the rewriting rules that should be applied. We'll indicate the system in a script typeface, typically \(\rewritingSystem{R}\), and list its rules as:

The LHS specifies a pattern that should match a particular local state (i.e. one or more tokens), and the RHS specifies how the matched state should be rewritten to yield a new local state (and hence a new global state). If multiple matches can occur in a given global state, the system is non-deterministic. If a maximum of one match can occur, the system is deterministic.

At that point we can evolve the system, which is an iterative process that is carried out either for a fixed number of steps, or alternatively in an ongoing fashion that never terminates. We may also reach a global state that cannot be rewritten because there are no matches: we say that a particular global state has halted.

This process generates a graph, known as a multiway graph or rewrite graph, in which vertices represent global states, and edges represent rewrites. We'll write the process that generates this graph to depth \(\sym{n}\) as:

To illustrate this setup, we'll focus on string rewriting systems, since they are both easy to visualize, familiar to those with experience with computer programming, and fairly easy to analyze.

Our first example will be the following extremely simple system:

Here we visualize the rewrite graph generated by \(\multiwayBFS{\rewritingSystem{R_0},\qstring{\lstr{bab}}, \infty }\):

Notice the important fact here that the two matches, at positions 1 and 3 of the original string, do not overlap: we say that these rewrites commute. This implies that we can rewrite those matches in either order, and the non-rewritten match will still remain. This gives us a hint of how we might attach a cardinal structure to the rewrite graph, yielding the rewrite quiver.

Formally, the rewrite quiver is the quiver whose cardinals are the labels formed by the following data taken as a whole: the rule that was matched, and the tokens that were involved in the match.

Here we show the rewrite quiver for this simple system, where the two cardinals correspond to the two independent rewrites: 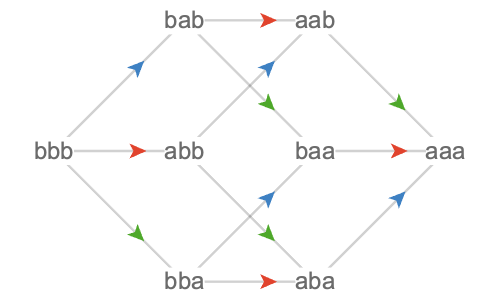 We can see already that this rewrite system yields a rewrite quiver given by \(\subSize{\gridQuiver{\sym{n}}}{2}\), a hypercube of dimension \(\sym{n}\), where \(\sym{n}\) is the count of \(\lchar{b}\)'s in the initial condition. The rewrite quiver is insensitive to the order of the characters in the string, only depending on the \(\lchar{b}\)-count. This is a generic feature of string rewriting systems in which the rules cannot overlap.

More generally, in any global state of a rewriting system in which we have \(\sym{n}\) commuting rewrites available, we will obtain a subquiver that is isomorphic to \(\subSize{\gridQuiver{\sym{n}}}{2}\).

Here we show the rewrite quiver for a variety of initial conditions: 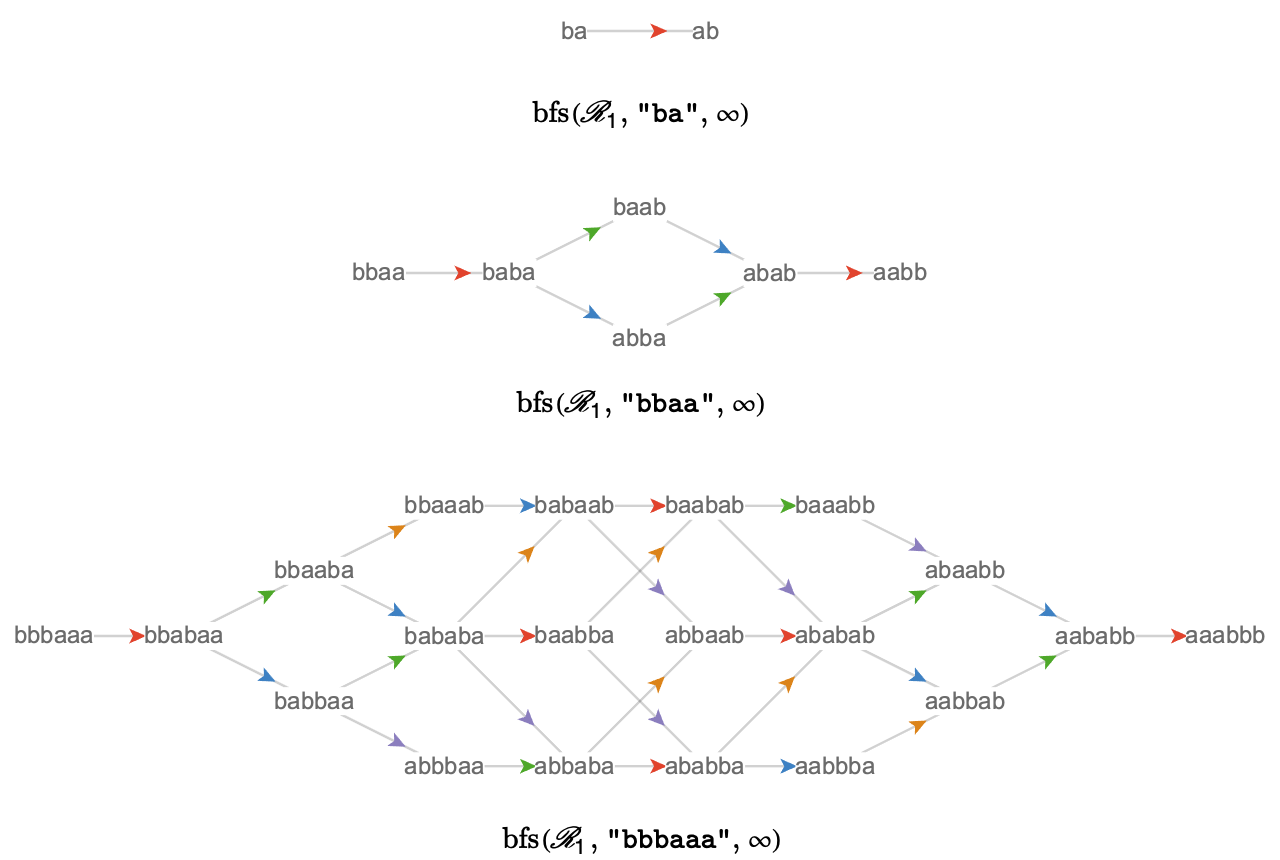 In the later sections Coverings and Contraction lattices, we introduce the notion of a quiver covering, which is a way of "gluing" or contracting vertices together in such a way that the result is still a quiver. By applying a modified form of this procedure to the rewrite quiver, we obtain "simplified descriptions" of the possible evolutions of the system, in which we conflate particular states as long as they do not violate causality. Here we show such a causality-preserving contraction lattice. 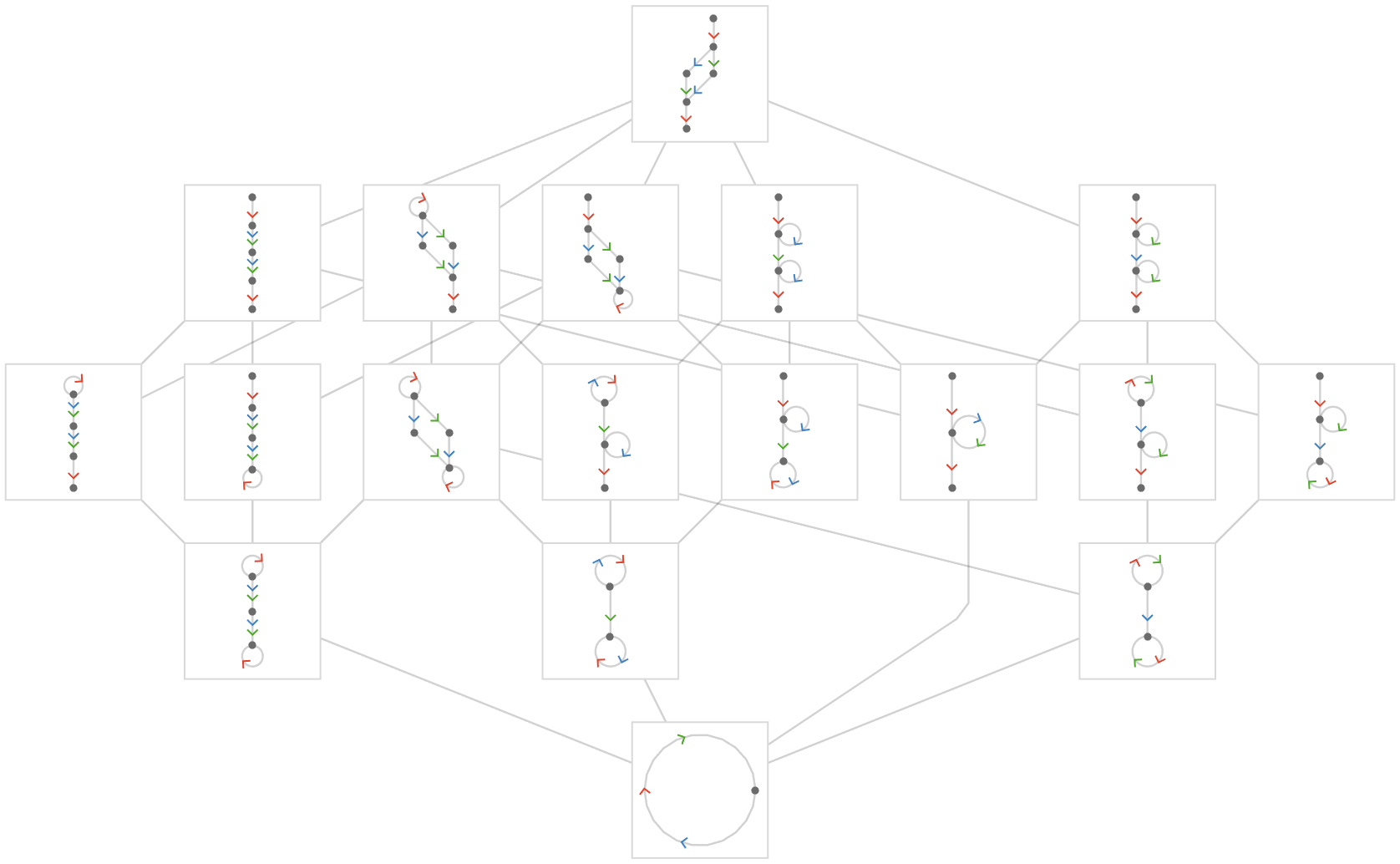 Intuitively, this object corresponds to the various ways in which we can "ignore" rewrites without violating the underlying causal order of the system. Each time we choose to "ignore" a rewrite, we will obtain a self-loop on the corresponding state.