An important task for quiver geometry is to describe the phenomenon of curvature. Curvature is a well-defined if somewhat intricate concept in continuous geometry -- what form could it possibly take in quiver geometry? It turns out to be connected to the presence of what we could call topological crystal defects in a quiver. We'll leave this idea mysterious for now, but we will return to it in time. The task of this section is to explore a simple example of a curved quiver, using a well-worn object: the Möbius strip. Doing this will make vivid the bookkeeping we will need to model arbitrary forms of curvature in more complex cases.

First we’ll introduce the bare connectivity / topology of the strip, without any cardinal structure. As we did for toroidal lattices, the edges that “wrap around” on the sides of the strip are labeled to show how they connect up:

We’ll now introduce the cardinal structure. There will be 4 cardinals present, though we will soon organize them into collections called charts.

Note the twist of the Möbius strip is also manifested by the fact that the cardinal \( \blFo{\card{b}} \) reverses apparent orientation when passing from the right side of the lattice to the left. There is nothing special about this location in the lattice; this discontinuity exists purely because the way we are drawing the lattice doesn’t match the topology of the lattice itself.

We’ll now focus on the regions where the charts intersect, since this well tell us how the cardinals in each chart relate to one another.

We can summarize these relations in a transport atlas for \( \quiver{Q} \), denoted \( \transportAtlas{\quiver{Q}} \): 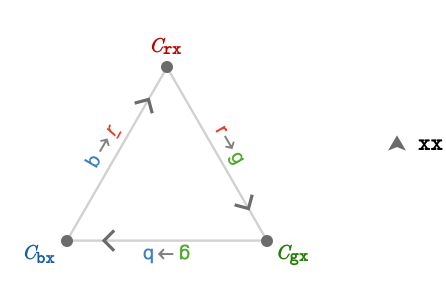 The vertices of \( \transportAtlas{\quiver{Q}} \) are charts of \( \quiver{Q} \), and the edges of \( \transportAtlas{\quiver{Q}} \) are transitions between charts, labeled with the cardinals from \( \quiver{Q} \) that can achieve them. Additionally, edges of \( \transportAtlas{\quiver{Q}} \) are labeled with cardinal rewrites, which describe how to rewrite cardinals of the tail chart to become cardinals of the head chart when making a transition between two charts. Notice that these are oriented versions of the path relations \( \word{\reFo{\card{r}}}\pathIso \word{\grFo{\card{g}}},\word{\grFo{\card{g}}}\pathIso \word{\blFo{\card{b}}},\word{\blFo{\card{b}}}\pathIso \word{\reFo{\inverted{\card{r}}}} \) we saw above.

Now, how do we interpret the non-orientability of the Möbius strip in this discrete setting? To do this we will now introduce the discrete analog of the notion of parallel transport from differential geometry. Parallel transport, which in differential geometry controls how tangent vectors are smoothly transformed as we move smoothly in the base manifold, becomes in the setting of quiver geometry cardinal transport: a process by which we can translate between cardinals in different charts as we follow a path in the quiver. Unlike in the continuous case, this transport is discrete: cardinals are replaced wholesale with other cardinals as described by the transport atlas.

Importantly, transport is associated with an entire path on the base quiver \( \quiver{Q} \), which is associated also with a path on \( \transportAtlas{\quiver{Q}} \). Let's examine an example for the Möbius strip.

We’ll start with an empty path, shown alongside its depiction on the transport atlas (which we’ll call an atlas path). We will gradually extend this path (colored teal), transporting the particular cardinal \( \reFo{\card{r}} \) as we go. We’ll illustrate how the cardinal is rewritten as we transition between charts in the atlas. To do this, we’ll superimpose a second, smaller path at the head of the first path to illustrate what it means to take the transported version of \( \reFo{\card{r}} \).

Notice that the cardinal rewrite, \( \cardinalRewrite{\reFo{\card{r}}}{\grFo{\card{g}}} \), that occurred corresponds to the edge we traversed in the cardinal atlas.

And again we obtained another cardinal rewrite, this time \( \cardinalRewrite{\grFo{\card{g}}}{\blFo{\card{b}}} \).

Summarizing the rewrites that occured, we see that transporting the cardinal \( \reFo{\card{r}} \) around this closed path \( \path{P_3} \) yields the transported cardinal \( \reFo{\inverted{\card{r}}} \), and hence the red path at the head is now oriented against the original direction of \( \reFo{\card{r}} \). So, while we have an quiver that is formed by the union of square-lattice charts, there is a non-local form of curvature that prevents us from gluing these charts together into a larger chart that describes the entire quiver.

We’ve seen how to define cardinal transport on a path in the quiver when we have a collection of charts, which we can organize into a transport atlas that summarizes the relations of their cardinals.

Can we formalize the phenomena of curvature we saw for the Möbius strip? To do this, we'll first introduce the notion of a signed cardinal permutation group, or a cardinal group for short, written \( \cardinalGroup{\sym{C}} \). This group is the group of permutations of a set of cardinals \( C \) and their inverses, with the restriction that if a permutation sends \( \rewrite{\card{x}}{\card{y}} \), it must also send \( \rewrite{\inverted{\card{x}}}{\inverted{\card{y}}} \).

The way around this is quite simple: we will relax \( \cardinalGroup{\sym{\quiver{Q}}} \) from the status of group to the status of groupoid. What is this groupoid? It is the action groupoid of partially defined permutations, represented as rewrites*.* We can compose such partial permutations whenever they do not specify contradictory information.

You may notice that this condition for when it is meaningful to compose partially defined permutations is similar to the local uniqueness property of quivers themselves. We will elaborate this connection in a future section, where we will see that rewrite systems give rise to quivers in a natural way, and we'll see that the cardinal groupoid is a rich motivating example.

Let's now see the curvature quiver, which is the quotient \( \quotient{\forwardPathQuiver{\transportAtlas{}}{\textcolor{#b50700}{\chart{rx}}}}{\transportMapSymbol{}} \): 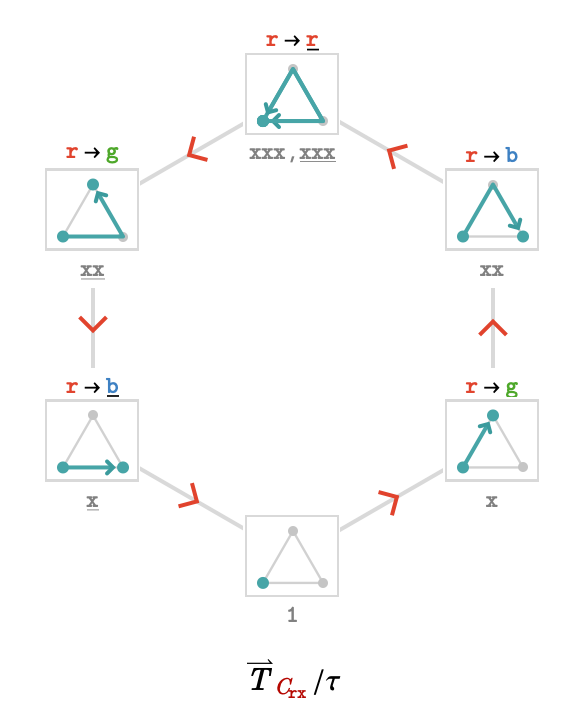 To interpret what we're seeing here: vertices of the curvature quiver are atlas paths, modulo their cardinal rewrites. In other words, all cardinal transport behavior, for a path of any length that starts in \( \textcolor{#b50700}{\chart{rx}} \), is summarized in this single quiver.

More specifically, we see that circling the strip in either direction once we obtain the same cardinal rewrite \( \cardinalRewrite{\reFo{\card{r}}}{\reFo{\inverted{\card{r}}}} \). Technically the equivalence classes in this quotient include infinitely many paths, being (positive or negative) powers of \( \repeatedPower{\card{x}}{6} \), since we can wind around the strip an arbitrary number of times. Only the first such winding in either direction is indicated in the diagram.

This was a particularly simple example that serves well to illustrate the basic idea about cardinal transport. In the coming sections we will extend this construction to model curvature of the Platonic solids, which will be discrete stand-ins for the sphere.