In this section we review the adjacency matrix of a graph and consider some of its basic properties. We ask how a similar structure might be devised to represent the cardinal structure of a quiver. Motivated by this question, we'll use the word ring to define routes and plans, which model subjective states of knowledge about potential paths in a quiver. Multisets allow us to obtain an isomorphism between plans and plan matrices. We then construct a particular plan matrix that plays the role of an adjacency matrix: the adjacency plan matrix (which has a corresponding adjacency plan).

Note: this section is largely incomplete and should be ignored for now.

For a finite directed multigraph, the entries can be arbitrary non-negative integers that simply count the number of edges \(\de{\vert{v_{\sym{i}}}}{\vert{v_{\sym{j}}}}\).

Here we illustrate some example graphs and their corresponding adjacency matrices:

Each \(\matrix{A}_{\sym{i}}\) gives the ordinary digraph adjacency matrix for the subgraph of the quiver \(\quiver{Q}\) consisting only of edges labeled with the cardinal \(\card{c}_{\sym{i}}\).

Here we show these mappings for some simple quivers: 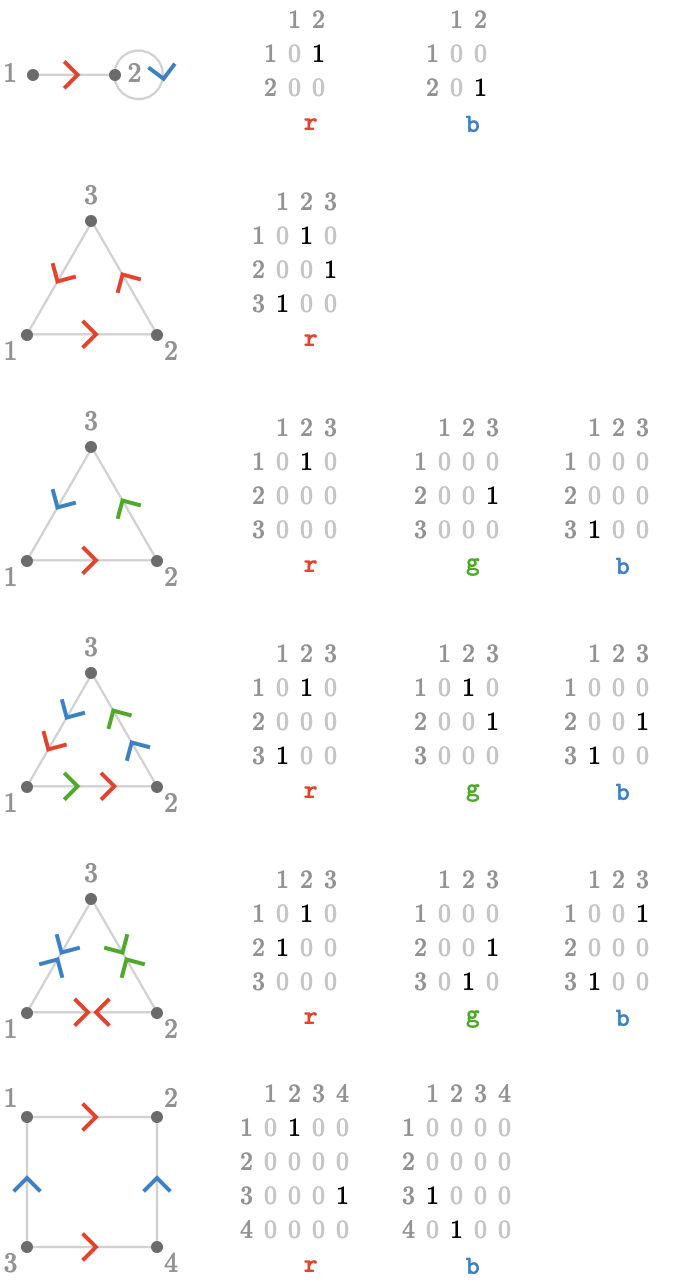 Back to single matrices 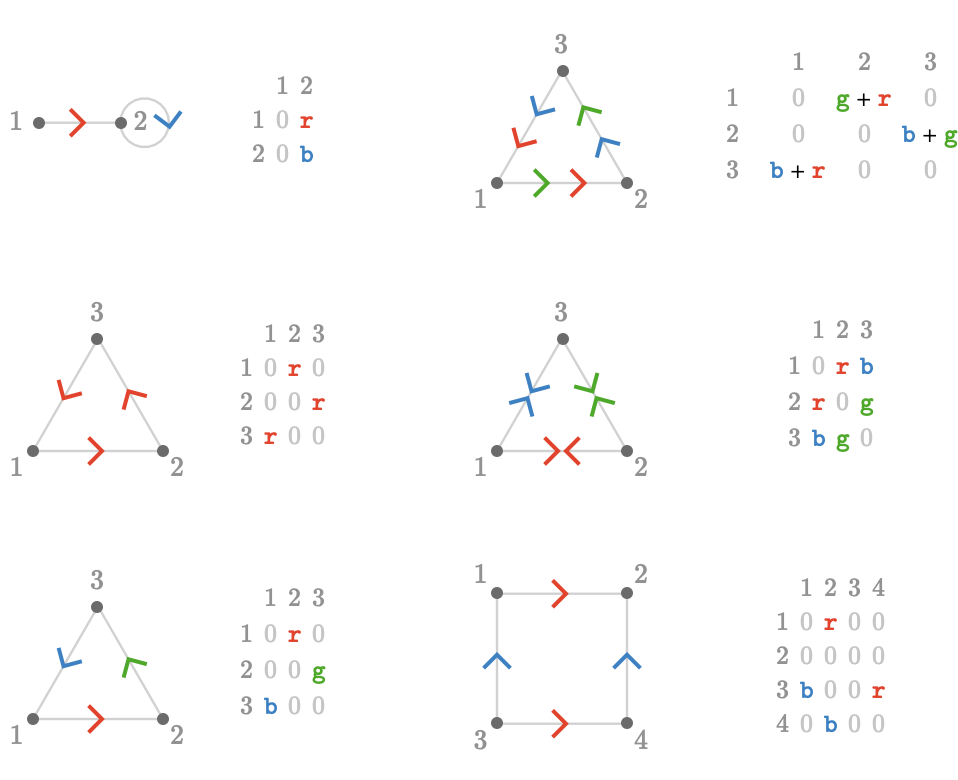 But if this idea is to work, what are these matrices? More specifically, what is the meaning of sums of the form \(\gform{\card{g}} + \rform{\card{r}}\) that can appear in their entries? These are simply elements of the word ring that we introduced in a previous section.

But there is more algebraic way to do this, which is by treating the cardinals as being the indeterminates of a polynomial, although the misleading term variable is sometimes used.

The adjacency polynomial \(\polynomial{a}\) represents the quiver in a particular sense that we will now explore.

We will now construct a family of structures that represents subjective states of knowledge of an agent about how they might navigate a quiver \(\quiver{Q}\).

The subjective states will describe how an agent believes it can move between ordered pairs of vertices \(\vertOf{\vert{v_{\sym{i}}},\vert{v_{\sym{j}}}}{\quiver{Q}}\), which we'll call endpoints. We'll organize the various forms of knowledge as follows:

A plan and a multiroute are said to be empty if they are empty as multisets.

Being a multiset of routes, a multiroute is necessarily also a plan. Conversely, a plan might contain routes with differing endpoints, and hence is not in general a multiroute. We can however refer to the multiroute for \(\fromTo{\vert{v}\fromToSymbol \vert{w}}\,\)within a plan, which is the multiset of all those routes with those particular endpoints.

The route word for a route for \(\fromTo{\vert{v}\fromToSymbol \vert{w}}\) is a path word that describes the imagined path from vertex \(\vert{v}\) to vertex \(\vert{w}\) as a sequence of cardinals.

The multiroute word for a multiroute for \(\fromTo{\vert{v}\fromToSymbol \vert{w}}\) is a path multiword that describes the multiset of imagined paths from vertex \(\vert{v}\) to vertex \(\vert{w}\) in terms of their cardinals.

As we said, plans are constructs that describe what an agent believes about how it is possible to navigate a quiver. These beliefs do not have to true, or even consistent, but we will of course define the logic of how to build true and consistent beliefs.

We've introduced the high-level concepts of routes, multiroutes, and plans. We'll now show how a plan can be represented by a matrix of a particular type.

Let's rephrase this in terms of individual routes, using the multiset interpretation of the word ring \(\wordRingSymbol\). Since each entry \(\matrixPart{\matrix{M}}{\sym{i}}{\sym{j}}\) is an element of the \(\wordRingSymbol\), we can interpret the entry as a multiset of path words. These path words will be the route words for individual routes for \(\fromTo{\vert{v_{\sym{i}}}\fromToSymbol \vert{v_{\sym{j}}}}\).

We can see now more clearly the utility of the word ring: multiwords in the word ring represent multisets of path words. Fixing an origin and destination \(\fromTo{\vert{v_{\sym{i}}}\fromToSymbol \vert{v_{\sym{j}}}}\), each path word describes a route, and hence a multiset of path words describes a multiroute. Organizing these multiwords into a matrix, we can represent an entire plan. Next, we'll consider the significance of the ring addition and multiplication of such plan matrices.

The set of \(\sym{n}\times \sym{n}\) matrices (whose entries are taken from a ring \(\ring{R}\)) forms a ring in its own right, called a matrix ring and written \(\matrixRing{\ring{R}}{\sym{n}}\), with addition and multiplication given by normal algorithms for matrices:

The matrices we used to represent plans for a quiver \(\quiver{Q}\) form a matrix ring, which we will call the plan matrix ring, written \(\planRing{\quiver{Q}}\):

This is the \(\sym{n}\times \sym{n}\) matrix ring (where \(\sym{n} = \vertexCountOf{\quiver{Q}}\) is the number of vertices), whose entries are elements of the word ring \(\wordRingSymbol\) over the cardinals of the quiver. We'll call a matrix from the plan ring a plan matrix.

Plan matrices are distinct from plans themselves, although we have shown how they are related under the multiset interpretation of rings. Specifically, a plan matrix represents a (possibly signed) multiset of routes. Is there a natural equivalence between plans and plan matrices?

The answer is yes, but in a similar sense to how matrices correspond to linear operators for a finite-dimensional vector space. Once we have chosen an ordered basis for a vector space, we can represent a linear operator as a matrix. Similarly, once we choose a labeling of vertices of a quiver, we can use plan matrices to represent plans, since the entries of the plan matrix are relative to a particular ordering of vertices. In the setting of a (countably) infinite quiver, nothing much changes, though our matrices become infinite. Questions of "convergence" are appropriate to worry about: we might require than any particular sum that occurs in the definition of plan matrix multiplication involves only a finite number of non-zero terms, but we will see how this can be achieved later.

We have already see how to define plan matrix multiplication and addition, and have attached multiset interpretations to these. It is worth now defining the same operations abstractly on plans themselves, since they are arguably simpler when we do not insist on representing plans as plan matrices:

Implicitly, if two routes cannot be composed, in other words if \(\pathCompose{\routeSymbol{X}}{\routeSymbol{Y}} = \nullPath\), that term is ignored in the construction.

In fact, plans form a ring, the plan ring, just like plan matrices do. These rings are isomorphic, as one might imagine.

We mentioned earlier that plans need not be consistent, although we didn't define precisely what consistency is. Roughly speaking, a plan is consistent if it is closed under composition with itself, meaning that any two routes in the plan that can be composed to form another route will form a composite route that is already in the plan. We naturally expect this of intelligent agents, since if such an agent knows how to get from A to B and from B to C, it necessarily must know how to get from A to C – if it does not already have a route from A to C, it can simply compose a route from A to B with a route from B to C.

We are now ready to engage with the original goal, which was to represent the cardinal structure of a quiver with a suitable generalization of an adjacency matrix.

Now that we have plan matrices, we can form the adjacency plan matrix \(\matrix{P}\) for a quiver. Here we show one example: 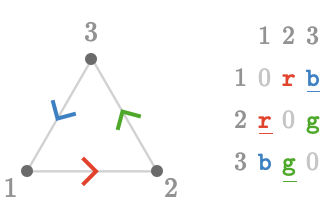 Notice the presence of inverted cardinals below the diagonal. Why is this necessary? The reason is that we can form paths out of cardinals or their inverses. In other words, we can traverse an edge \(\tde{1}{2}{\rform{\card{r}}}\) in the forward direction, yielding the path \(\pathWord{1}{\word{\rform{\card{r}}}}{2}\), or we can traverse it in the backward direction, yielding the path \(\pathWord{2}{\word{\rform{\ncard{r}}}}{1}\). If we wish for all paths of length \(\sym{n}\) to be present in the iterated adjacency plan matrix \(\power{\matrix{P}}{\sym{n}}\), we must encode a given edge in the adjacency plan matrix in both the forward and backward orientations, corresponding to a normal and inverted cardinal present in entries mirrored around the diagonal.

Powers of the adjacency plan