In Cardinal transport, we used the Möbius strip as a toy model to take the first steps towards defining curvature in the setting of quiver geometry. We defined the transport atlas, which measured the effects of cardinal transport when moving between charts of the strip. We saw a form of non-local curvature, corresponding to paths that circled the strip an integer number of times, and summarized this curvature in a curvature quiver.

In this section, we will repeat this procedure for a cardinal quiver corresponding to the most familiar of the Platonic solids, the cube.

The underlying graph of a cube is very simple:

However, we will find it more intuitive to work with a subdivided cube, since it allows us to understand its behavior on the individual faces more clearly: 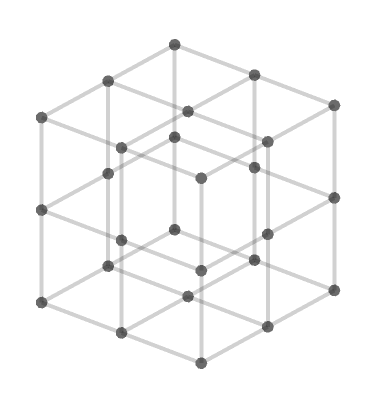 How do we attach a quiver structure to this skeleton? The cardinals we’ll use will correspond to the orbits of permutations of vertices that are associated with particular axes of symmetry that pass through the faces of the cube. These permutations do depend on a particular embedding of the graph into \(\mathbb{R}^3\), but once we have this cardinal structure we will immediately forget this embedding.

Putting these cardinals together we arrive at a cardinal quiver: 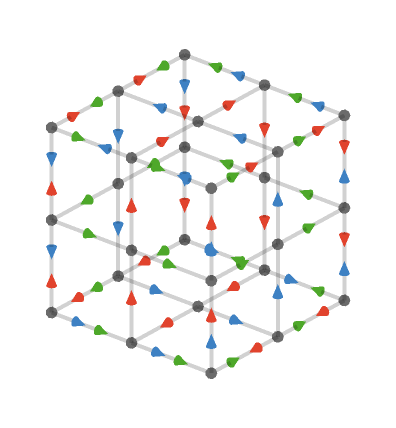 This is visually busy! We'll now organize these cardinals into charts.

The charts we will use will consist of pairs of the cardinals \(\rform{\card{r}},\gform{\card{g}},\bform{\card{b}}\). We’ll pick the charts to correspond to the subgraphs on which those cardinals individually commute pairwise, in other words, in which the cardinal relations are those of \(\subSize{\squareQuiver }{3}\). These charts will correspond to faces of the cube. Notice that the charts split into pairs of opposite faces: 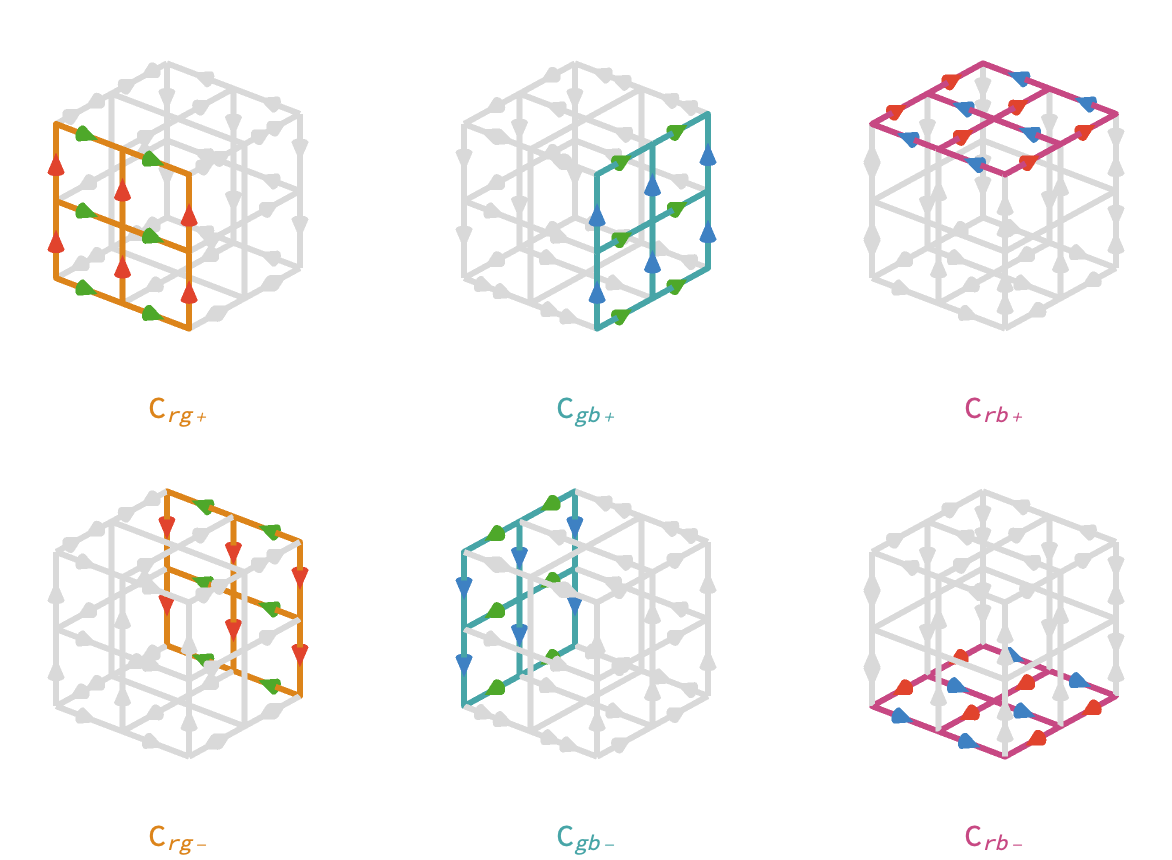 Here is the transport atlas, written \(\transportAtlas{\quiver{A}}\), plotted in 2 and 3 dimensions. Since the vertices correspond to faces of the cube, and edges to shared edges of the cube, the connectivity of this graph corresponds to to the dual polyhedron of the cube, which is an octahedron:

There is a lot going on here, but don’t worry, we will unpack these diagrams!

These matrices connect to our earlier notion of a cardinal groupoid. In fact, they are simply a representation of this groupoid, in an identical way to how matrices provide linear representations of ordinary groups.

A benefit of having these matrices is that we can compute the curvature quiver using the same matrix machinery that we have used previously to produce lattice quivers. The atlas serves as the fundamental quiver, and the matrices \(T_i\) give us the path value map that we use to compute the quotient \(\compactQuotient{\transportAtlas{\quiver{A}}}{\chart{\sym{i}}}{\function{T}}\), where \(\functionSignature{\function{T}}{\sym{i}}{T_i}\) acts as a cardinal valuation. We’ll use \(\textcolor{#dc841a}{C_{rg+}}\)as the origin chart, but this choice is arbitrary.

Before we construct the curvature quiver, it is interesting to note that the atlas \(\transportAtlas{\quiver{A}}\) is the fundamental quiver of the rhombitrihexagonal lattice, a fragment shown here: 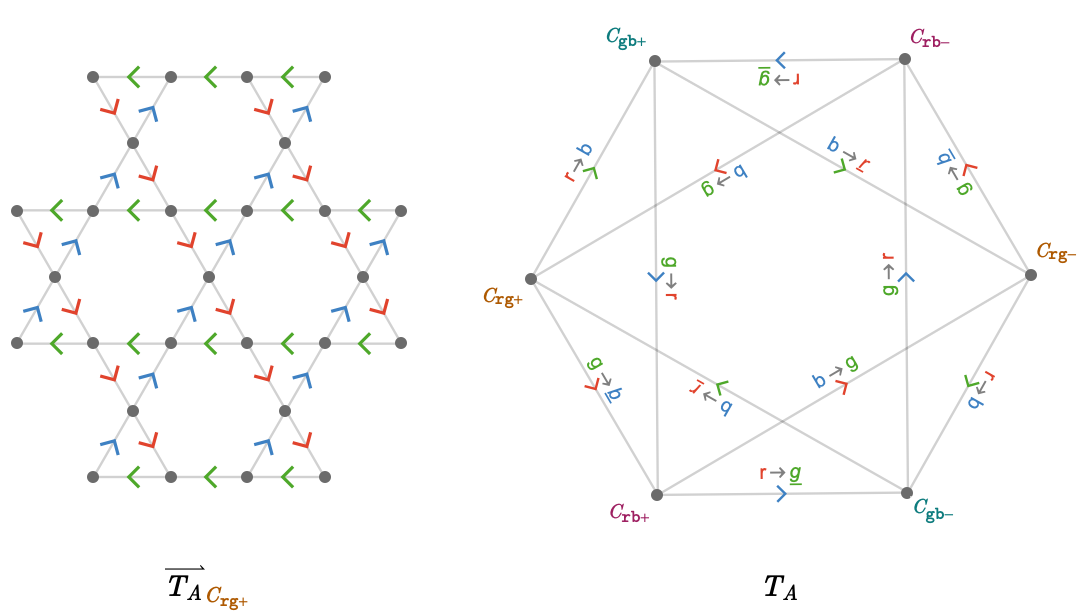 Computing the quotient \(\compactQuotient{\transportAtlas{\quiver{A}}}{\chart{\sym{i}}}{\function{T}}\) for the cardinal atlas under the cardinal valuation \(\sym{T}\), we obtain the curvature quiver, shown below: 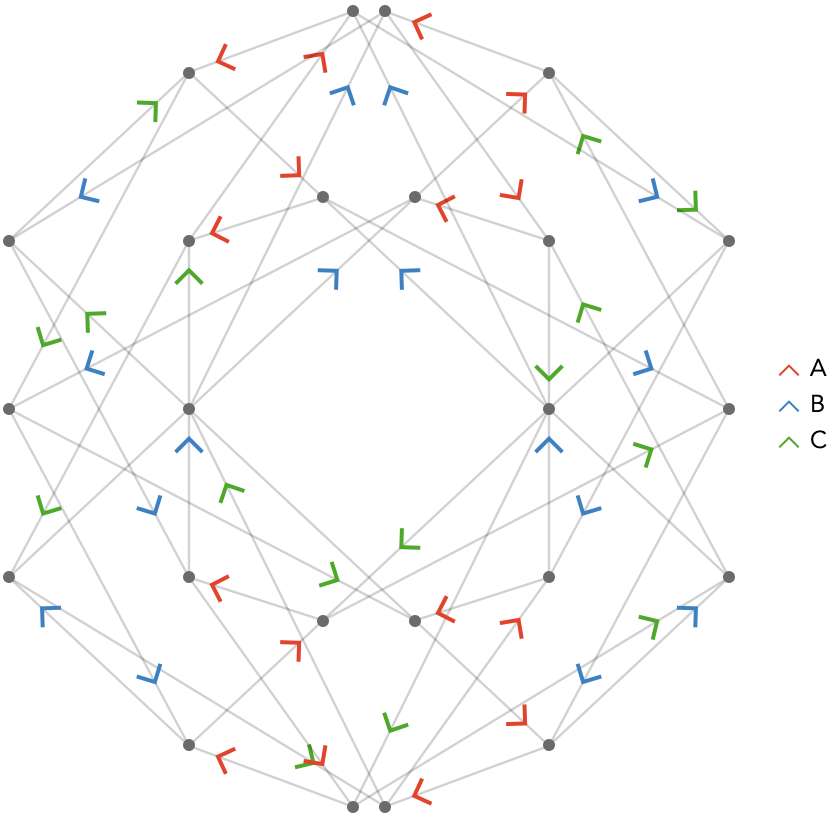 It turns out that this 24-vertex curvature quiver is the Cayley quiver of the so-called binary tetrahedral group. Each vertex in the curvature quiver represents an element of the group, and the edges correspond to the actions of a particular set of generators. Each vertex of the atlas lives on 4 cycles, each of length 4, that together make up the whole graph: